After spending several days taking in the enchanting Roman capitol, a 14 hour overnight bus trip took me the length of Italy, via Florence and Milan. Leaving Rome I was awed by the gorgeous countryside surrounding the city and passed clifftop Medieval towns such as Orte and Orvieto (worth googling to see the pictures of them). Arriving at sunrise in Germany I was fetched by an old friend, and after a lovely breakfast with his lively family, we packed our rug sacks and headed towards the mountains: we were going to brave the Bravarian Alps and spend three days in the mountains.

Our route was a three day circular trip that would see us climbing 1800m, and staying in two different mountain huts. We made light work of the 1 hour drive from my friend’s country village to Oberstdorf  where we parked our car and began the walk. Within minutes I was totally enamored  by the Barvarian foothills. As per countless pictures and films of the region, beautiful wooden cabins lined the road, the ubiquitous flowering pots covering the length of their banlconies, and yes, cows with bells. Lots of them!

The first day’s climb was steep, but offered continuous vistas of the rolling valleys as we
headed for Rappenseehutte – the largest (and in my opinion most scenic) of the +300 huts scattered 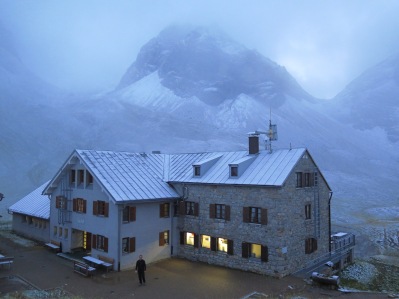 across the mountains. Climbing the final accent to the Hut required the very last bit of energy I had. You climb a steep hill, and within steps over the ridge, a whole other world opens up. The ‘hut’ – which has more the appearance of a towering mountain lodge, is perched in a narrow valley, over looking a tarn, and surrounded by more towering snow covered mountains. I stood taking in the view and within seconds, as if on command it began to snow. I stood with the snow flakes gentler ricocheting off my body and simply wept. The surrealism of the moment was so overwhelming that I couldn’t respond in any other way.  I was so taken back by the experience that was I oblivious to the cold and my increasingly wet clothes from melted flakes, and quickly woke up to the fact that I was freezing and needed to head indoors.

The huts offer typical Bavarian meals, and after a long climb the spaetzle (noodles with crumbed dumpling pieces), pretzels, goulash and beer was most welcome. As often with hiking we slept early, but very comfortably in our dorm knowing we were wondrously sheltered from the sub zero temperatures outside!

The following day’s walk was a 16km hike across two valleys to reach our second hut for the trip – the Mindelheimer Hutte. Sadly clouds obscured much of our view of the day, and we only caught the occasional glimpse of the mountain landscapes around us. The odd
snowfall also reminding us how high we were as we explored these southern German mountains.

The long walk and quiet surroundings

gave us space to catch up after 10 years of geographical distance. Equally valuable, was the long periods of silence and the natural reflection that ensued. Famous mountaineer John Muir said, “I only went out for a walk and finally concluded to stay out till sundown, for going out, I found, was really going in.” We both needed the space: my friend was mourning the loss of a child who passed away in his wife’s third trimester, and myself less tragically, the leaving of my job and vocation of 15 years. At times tears accompanied the mountain paths, and at others laughter, both tangible and outward expressions of the work happening deep within.

Our second evening was spent with more regional cuisine and beer. I even splurged, treating myself to a 1 Euro per minute hot shower – but probably the best shower I’ve ever had. We were about to sleep, when in walked a rather large, loud, and intoxicated Bavarian man, and proceeded to prepare to bed down next to us. As a frightfully light sleeper, I warned my friend that we were most likely in for some snoring, and should move beds then. He thought we should wait… Within 2 minutes of sleep the man was making sounds that had the room not have been well insulated, would have been reverberating along the valley! He went off to find another room, and minutes later called me to the new dorm. About to sleep I was confused at his sudden bout of late night chuckles – only to discover that he suddenly realized that the room may have been a ladies dorm! Thankfully we woke and discovered this was not the case…

The following morning we began our descent back to the car park, and again the mist seemed to deny us views of our surroundings, but didn’t detract from the experience of being in such a beautiful place. Arriving freezing back at the car, I’ve never so fully appreciated heated seats – and yes, Macdonalds coffee on route home.

Find out more on the national response website: sacoronavirus.co.za